The other day I dragged myself outside to explore a new corner of Amsterdam. Armed with a thermos, camera, and umbrella, Jesse and I set off towards the Eastern Harbor of the city, not too far away from us. We live just on the edge of the harbor area, but we usually center ourselves towards the city, going into the canal belt area for cafes and shopping. This time we headed out, and were rewarded!

The Eastern Docklands islands were created in the late 19th century and stayed busy with shipping until the 70s, when they became a bit run down. In the past 30 years Amsterdam has encouraged modern architects with new ideas, and now the area is alive with townhomes, office space, art and music areas, shops and restaurants. All of it has a drastically different vibe than the city center.

A series of “islands,” the area is scattered with bridges like most of Amsterdam. But instead of stately brick arches, these bridges are fun, playful and fully modern. You might first see the Jan Schaeferbrug, which reaches over the IJ Harbor and passes right through a building.

Next, you might wander through the residential Java Island. With canals cutting across it every few feet it has a series of playful bridges connecting the streets.

But the stand-out, best bridge of the area is by far the Pythonbrug, a red twisty wonder connecting two residential peninsulas. It was designed to be fun to look at and use, is tall enough to let ships into the small harbor. There’s a twin red bridge to the side, lower and flatter to allow for bicycles. The Pythonbrug is like a roller coaster to walk over, and you get seriously high up! I was tempted to raise my hands in the air on the way down. Okay, I admit, I did. 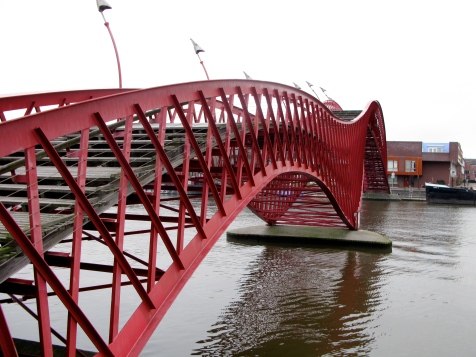 The smaller bridge, the harbor, and De Walvis (The Whale), a recent apartment building

The whole area around the bridge is full of modern Dutch homes, great for families who want to be a 15 minute bike ride away from the center. It’s amazing that all this is a mere step away from the traditional, stately, 17th-century Amsterdam I usually encounter. It just goes to show– get out and explore!