Our second requirement for celebrating Jesse’s 30th (golden!) birthday, was whiskey. We started with the Whiskey Experience. 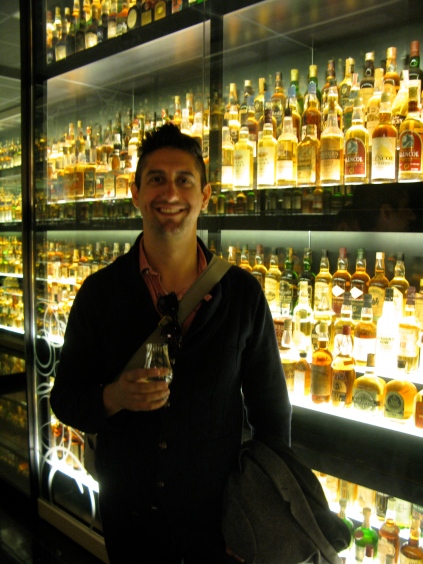 Right on the Royal Mile, the Whiskey Experience is pretty touristy and starts off with a kind of kitschy ‘barrel ride’ through whiskey production. But, as someone who didn’t have a clue before, I did come away knowing a lot more about making whiskey, which was pretty interesting. And it comes with a tasting, a keepsake glass, and a peek at the world’s biggest whiskey collection (over 3,300 bottles). 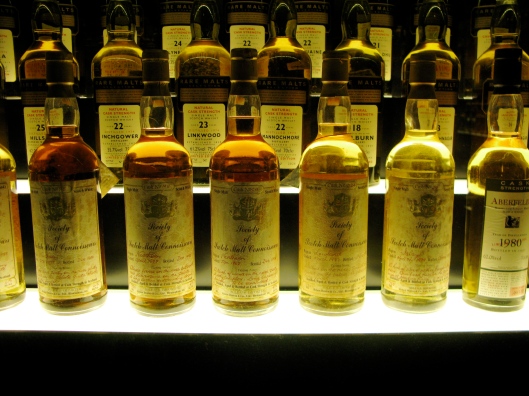 I did not know that whiskey must be aged in a previously-used barrel, like bourbon or sherry. And that all of it’s flavor comes from the aging process, which is why you get expensive whiskies aged 70+ years. I also didn’t know that during aging a small percentage is lost–poof, gone–and this is called “the angel’s share.”

Scottish whiskey, or scotch, is from Scotland, while Irish whiskey is slightly different (and from Ireland, of course), and bourbon is American whiskey (also different). Single-malt scotch comes comes from one distillery and one barrel, while blended whiskey (the most popular on the market) is a blend of many kinds.

We also visited Tullibardine Distillery on a later day, which was a fun glimpse of a small distillery. I’d wager, though, that Jesse’s favorite moment was at The Bow Bar, where he found his holy grail: a 30-year aged whiskey, like himself. He’d been talking about getting it ever since we planned the trip, to anyone who would listen. We chose a nice old pub, got ourselves some drams, and sat down to watch the world go by for a bit. Cheers, Prost, or, if you’re in Scotland, sláinte! 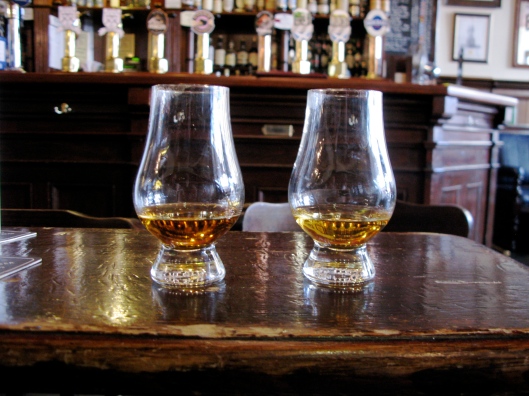 Jesse’s is on the left, a Glenfarclas 30 yr old whiskey.